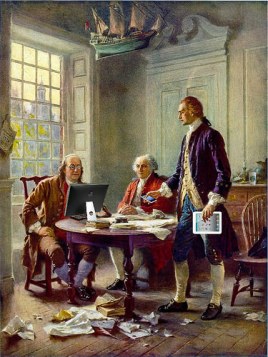 Recently my reading started leaning toward history rather than fiction, especially history of the American revolution. After much prodding my husband finally persuaded me to listen to the writings of author David McCullough (through Audible recordings). Stubbornly, I actually started with his book “1776,” rather that the suggested book about John Adams (because who?). The telling of 1776 follows George Washington’s leadership of America’s fledgling military against the British monarchy. After reading 1776, I was in awe that our country was even able to succeed in winning independence against such a great military power at the time.

Following 1776, I listened to a few works of fiction and then returned to David McCullough, this time with less enthusiasm (sorry to say) to visit the life and times of “John Adams.” Historically, Adams, our second president, is not well remembered nor looked upon fondly (look at our money—where’s Adams?). He is often described as a rather rotund, feisty and irritable type. However, David McCullough’s portrait of Adams presents a more flattering, well-rounded view of this fascinating man, and highlights the touching love story and counsel with wife Abigail and relationships with other founding fathers such as Jefferson, Washington, and Franklin. Adams was a central figure with Jefferson in writing and championing the Declaration of Independence. For that alone, I  feel he should have a high place of honor.

The day before the end of my reading of “John Adams” I happened upon a blog piece about synchronicity, something that occurs with frequency in my own life. Synchronicity is the experience of two or more events that are apparently causally unrelated occurring together in a meaningful manner. The blog piece equated such events to markers along a life path, subject to interpretation much like dreams. Sometimes we fail to recognize or we skim over the importance of some synchronistic events, but fortunately I thought, the remedy is simply–be more mindful. I also realized that when synchronicity pops up in our day, we may be aware and relish such times, but we most often fail to write them down and their inspiration may be lost. So I finally wrote this one down as it seems to have left a lasting impression on me.

I hate it when a good book ends. The following day, as I approached the end of the John Adams book, I backed up the recording several times to listen again to parts of the last few chapters I thought were important to understanding the character of John Adams, his relationships, and this fascinating time in history. As I sat in my car ready to head north to work, with the last minutes of this book remaining, I backed up the recording one more time–just another 5 minutes would do. I wanted to listen again to what he passed along to his grandchildren in the letters this amazing grandfather wrote near the end of his life. At about half way to work, the story and life of John Adams ended [big sigh].

Again I was in awe. Most of us are unaware that Adams and Jefferson died the same year, on the same day—July 4th. Just let that sink in for a bit. Ironically, not much has changed in our time: The party factions and politics of Adam’s time are eerily reflected in our current time. This was an amazing and well told story about a founding father whose strength of character and numerous contributions to our country ought to be more widely known and emulated.

Now what? I hadn’t downloaded my next book, nor even decided 100% what it would be. With less than half the commute left, I switched over to radio to listen to Dave & Deb in the morning on Z104. They were in the middle of talking about an event they had attended the night before–acting as MC’s and representing the radio station. The person who was supposed to sing the national anthem didn’t show. They were commenting and chuckling a bit about the awkwardness of the situation, but ultimately focusing on what an awesome and memorable experience occurred with the audience and they wanted to share it with their listeners with an audio recording.

Dave explained that they began by leading the audience with the pledge of allegiance. Who better than those two to have this honor! He and Deb traditionally do the pledge every morning with some lucky radio caller. Then courageously Dave began leading the audience to begin singing the national anthem. Since he was holding the recording device, it unintentionally picked up his voice above the audience even though he had not intended to be the singer that evening. He played the previous night’s audio recording for all of us–the radio audience–mentioning that he had inadvertently started the song out a bit too high and had to switch to and improvise a lower harmonizing track (which was beautifully executed by the way), rather than strain to hit the high notes.

Now I’ll admit that I sometimes get a bit misty during the singing of the anthem, especially if there are jets flying or our men in uniform are standing at attention; but as the voices of the audience swelled with a heartfelt rendition of our anthem, this time tears of joy were streaming down my face.

I still marvel that the conclusion of the incredible story of John Adams, one of the founding fathers of our great nation and a champion for the people, was immediately followed in synchronistic fashion by a very moving and beautifully rendered anthem by “we the people.” How could I be more moved by the power of synchronicity than this!

******* As in John Adams’ time at the writing of the Declaration…we, the people, become united when called upon to rise to the occasion.*******